March - much to my surprise - brought the heaviest snowfall I'd seen here for several years, and the cold weather really put the double glazing I had installed last year through its paces. It passed with flying colours.

I also went to a couple of cracking gigs: Stick Men at the Acapela Studios outside Cardiff and Claexico at the Colston Hall in Bristol.

I suspect that I've already watched more television so far this year than I did in the preceding decade. Not only am I hugely enjoying my Netflix subscription (which meant that I was able to watch Alex Garland's spectacular adaptation of Jeff Vandermeer's book Annihilation on the day of its UK release) but watching the 4K releases of the BBC's series Planet Earth II and Blue Planet II has been a spellbinding experience. The wider colour gamut of the new TV is most impressive, particularly when you're watching underwater footage of coral reefs teeming with vividly coloured fish. And the increased resolution, now that I've got the picture set up properly, is staggering. There was even more detail visible on the Tyrell Corporation building at the beginning of Blade Runner than I expected to see.

However, I've found it surprisingly easy to resist the temptation to upgrade copies of my favourite films to the new format. With many films, the versions I already have are high-enough resolution for my eyesight; some films are about the drama, rather than the spectacle. I could also argue that a film that was originally shot on 35mm film isn't going to gain the amount of benefit from higher resolution that something shot in 70mm or IMAX does (or, at least, should). But the 4K releases of some of my favourite films, movies that really ought to provide a visual feast in 4K, are getting less than spectacular reviews. Inception is described as "disappointing" and has sharpness and colour timing issues; the 4K release of Terminator 2: Judgement Day suffers from a digital cleanup that has removed much of the fine detail and has a cooled down colour palette which also earns it a verdict of "disappointing." The Fifth Element is criticised for "contrast and brightness (that) waver dramatically depending on the scene" and a "weirdly inconsistent grain structure" so I won't be buying that release, either.

It's a bit of a let-down; I should be rushing out, lemming like, to buy updated versions of content I already own so I can savour the increase in picture quality, just like I did when I switched from VHS to DVD, and when I upgraded from DVD to Blu-Ray. Instead I'm left feeling that in many cases the film companies just can't be bothered to do a decent job.

I just hope the forthcoming 4K release of 2001: A Space Odyssey does its material justice.

It might be the vernal equinox at quarter past four on Tuesday afternoon but clearly, winter isn't done just yet. 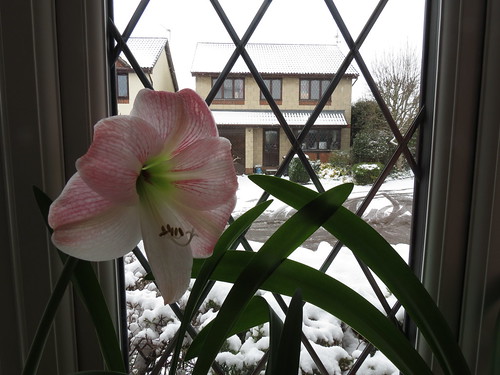 I saw the forecast yesterday so I was expecting there to be some snow outside this morning, but I wasn't expecting quite as much as I've got. Just one of my collection of Amaryllis plants bloomed this year and the thing is probably feeling very confused right now.

I headed into Wales on Friday, to the little village of Pentyrch just north of Cardiff. I had a ticket to a concert at Acapela Studio which was given by one of my favourite progressive rock trios, Stick Men. It's been a few years since I last saw them live - four, in fact - and the band have taken things to another level since then. When I chatted to Markus before the show, he said that something has changed on this tour, and that he has felt a deeper connection to the audience. When the show got under way I could see (and hear) exactly what he meant. His posture and body language was entirely different and his playing was relaxed and fluid. And spectacularly good.

In two short sets separated by an intermission, Markus, Tony and Pat showed the audience just what you can do with a T8 Touch Guitar (Markus is road testing the new model of his signature instrument), a Chapman Grand Stick, and a drum set. It turns out that that's one hell of a lot. The band push themselves just about as far as a trio can go, both with their own compositions but also with tracks from King Crimson and Mike Oldfield - as well as snatches of music by classical composers including Carl Orff and Tchaikovsky - playing material originally written for far more than three performers in a way that never felt thin or cut down. How Markus and Tony manage to do what they do and have enough cognitive power left over to sing while they're doing it is beyond me. Their version of Crimson's "Level 5" - which Crimson currently play with an eight-piece band that includes Pat and Tony - was probably the best live performance I've seen. The whole band were intimidatingly good, but Markus's solos were spectacular. I realised at one point that I was just sitting there gaping, mouth wide open. As an audience member it was something special to treasure, and as a performer it's very much a level to aspire to. It was a gig that will stay with me for a long time.

The night turned out to be quite a social event too, as I bumped into a friend I hadn't seen for a few years and met up in real life with people I previously only knew through Facebook. And I also got to chat with Markus, Pat and Tony after the show. It was a very memorable evening.

It's just a week after snowmageddon, and this weekend it's been warm enough to walk about outside without needing a coat. Despite this, there are still the occasional lumps of snow lying about in shady spots, the remnants of the biggest snow drifts (at the side of the A46 south of Old Sodbury, they were over five feet deep.) They won't last much longer, though - there's plenty of sunshine and at 12°C outside, the temperature today is well in to double figures.

Last night I was at the Tortworth Court Hotel to help celebrate my friend Richard's 50th birthday. There is a significantly high probability of me having a bit of a hangover right now.

Today is Douglas Adams's birthday. Were he still alive, he would only be 66 and would, I am sure, still be writing material that would be witty, acerbic, exasperated, and surprising. Were he still alive, I am sure he would have been giving interviews this week about the Hitch Hiker's Guide to the Galaxy, which was celebrating the 40th anniversary of its original broadcast on BBC Radio 4, back in 1978. But Douglas died of a heart attack in 2001 at the desperately young age of 49. He is still very sadly missed.

Despite being dead, he is still producing - or, at least, helping to produce - new material; the first episode of the latest series of The Hitch Hiker's Guide to the Galaxy was broadcast this week, forty years to the day after the first ever episode was aired. Many of the original cast were present, and it was a delight to hear their voices in character once again. The new series is based on material written by Eoin Colfer, but assistance from Douglas came in the form of several hard disc drives from his computer, on which are kept sketches and ideas which never made it into the original show. The initial result of this collaboration was Colfer's novel And Another Thing... that was published in 2009, and it's this novel which forms the basis for the new series, which has been named the Hexagonal Phase.

The result is something that often sounds like the show, but ever so slightly different. In much the same way that the "uncanny valley" effect can unsettle someone when they come across something that is pretending to be a human being but has not quite managed it, the slight differences - in the choice of names for planets or minor characters, for example - can have a mildly disturbing effect on the listener. It's a testament to Colfer's writing that his style comes close enough to Adams's own to trigger the effect.

Episode 2 of the new series will be broadcast on Radio 4 at 6:30 pm on Thursday, March 15th. If you're in the UK, you can listen to the first episode on iPlayer using the first link above.

This blog post originally contained a long rant about a badly written book that I was reading. I've taken it down, because making fun of somebody else's genuine efforts to write about something they obviously care about deeply felt childish and negative.

The snow arrived as promised; from the early evening onwards on Thursday there was one of the heaviest snowfalls I can remember here, dumping more than six inches of the white stuff in my back garden. 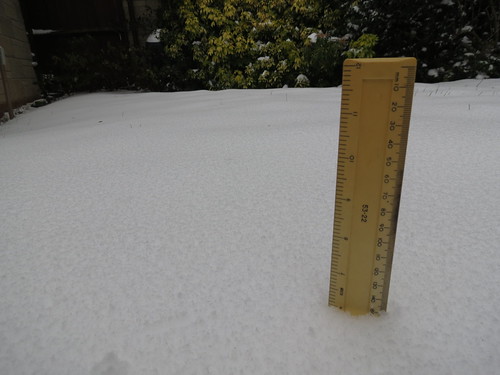 It all looked rather pretty. I worked at home again on Friday and stayed nice and warm indoors. A lot of other people did the same, although not everyone had a choice: ten miles or so further north in Slad, Ruth and Will reported drifts more than five feet deep on Friday. Not only were they snowed in, their pipes froze and they had to melt snow to get drinking water. Today the cold snap has come to a close and the temperature here is now well above freezing, the snow is melting (it's already slid off the conservatory roof) and with yet higher temperatures forecast tomorrow together with rain, I expect things to be mostly back to normal by Monday morning.

The new windows have come through the challenge of the last few days with flying colours, and I haven't needed to leave the heating on overnight once - although a hot water bottle has come in handy.

WAITING FOR THE STORM

So far today the weather has been rather anticlimactic. Light snow fell sporadically during the day but it didn't start to settle until abround three in the afternoon. I've been working at home today, and the chief feature of the weather I've noticed has been the cold; I put the central heating on for a couple of hours at lunchtime, but by the middle of the afternoon I'd caved in and set it to run continuously; I'd also switched on the fire in the living room for a while. I even ran the fan heater in the conservatory for an hour as the temperature in there had dropped down to 1°C, which was still warmer than it was outside, where the temperature didn't manage to climb above -2°C. After days of temperatures remaining below zero, the ground is cold enough that the snow isn't melting when it lands. With the cold air keeping falling snow fine and dry, the light snow we've had here has been blowing around in the street rather than lying where it fell. As it begins to get dark, the road outside is covered but there's probably less than 2 cm of snow lying. I can still see grass on the lawn at the back. Given the hyperbole being thrown around yesterday, I have to admit that I'm feeling quite disappointed. When I can stay inside and look at it through the windows, I rather like a good fall of snow.

The Met Office have issued a red warning for Devon and Somerset, though. Their models are predicting significant snowfall further west when Storm Emma finally arrives, and here we have an amber warning in effect until Saturday. So I guess I'll have to wait and see what turns up overnight...