July brought a heatwave, the season finale of Doctor Who, Dalek cakes, interminable episodes of various reality TV shows, lots of photography, and a visit from my brother and his family who live in California.

Oh, and did I mention I changed my car? It rocks!

THE ART IS OUT THERE

New Scientist magazine mentioned an exhibition that opens today at the Judah L. Magnes Museum in Berkeley, California. It features artwork which was "decoded" by the conceptual artist Jonathon Keats from a signal received by the Arecibo Radio Telescope. Aliens wouldn't send messages about mathematics or star charts, he says; they would send art.

It's a lovely idea, but as this is the guy who recently attempted to engineer God in a petri dish and who auctioned off futures contracts on his brain a few years ago, it might be worth taking a pinch of salt along to the show...

Another gem found courtesy of the graphics website Drawn! - the Circle Project features the artwork of Richard Sarson, who constructs images from hundreds of carefully drawn circles. Yes kids, he uses a pair of compasses and felt tip pens: no computers are involved at all. His images remind me of the patterns in the Altair Design pads I used to have as a kid. I was delighted to discover that they are still on sale.

Oh, and the clipart movie that Drawn! blogged on Friday is well worth a watch as well - it's got a really hypnotic quality to it.

I've been spending a few days with my parents and siblings, which has been fun. My brother Andy came over from America, my other brother travelled to Norfolk from Orpington, and my sister came over from Norwich, so there was a real house full - particularly with six kids under ten involved! There was much catching up to do, food to be eaten and drink to be consumed.

I enjoyed the drive over there, too - in something a bit more sporty than my old Mercedes C-Class... 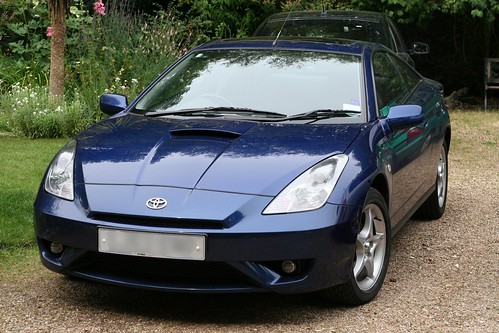 It's nice to have a sun roof (or as Toyota calls it, a "Moon Roof") again. The weather was kind for the most part, although we had thunderstorms for a couple of days; I suspect that one lightning strike yesterday may have caused a power surge, as the TV and the oven stopped working. It made me realise how useful surge protectors are for electrical equipment. If you don't have one on your stereo or your TV, I'd consider getting one...

rbrwr, one of my Flickr contacts, recently introduced me to a cool web application called Wayfaring. Once you've set up a free account, you can create maps for events, holidays, routes and other geographically dependant happenings. It's rather nifty.

It's turning out to be a busy weekend. On Friday I just had time for a swift G&T before heading out for an evening's imbibing at the 11th South Cotswold Beer Festival. Which reminds me, the BBC have a wonderful assortment of photos from the Chap Olympics which were held in London recently. The Chap magazine is one of those publications that the rest of the world (with the exception of Kevin Spacey) is unlikely to perceive in its full and resplendent glory, but even if you're not British you're still welcome to try.

Then on Saturday it was my pal Matt's birthday - so we all headed down to the Showcase to catch the new Superman movie before moving on to the Waterfront area of the city for food and more drinks. The film was OK, but not up to director Bryan Singer's usual efforts. The pacing was way off the mark, the cast were uninspiring (apart from Kevin Spacey again, who made up for just about all the minus points in the film) and the plot took one or two fairly large liberties with Superman's history. After reading this article, one might suspect that its shortcomings might have something to do with the management team involved rather than the director, but who knows for sure?

A web page featuring 25 of the greatest Calvin and Hobbes cartoons. Is it really 11 years since Bill stopped drawing them?

Now that's my kind of headline. If I see an article like "Killer kangaroo evidence found" then of course I'm going to click on it. This story was about an Australian team's discovery of fossils of meat-eating kangaroos with long fangs. Mind you, I think they're stretching it with one of the other discoveries they made, of the fossilised remains of a carnivorous bird which is referred to as the "demon duck of doom."

Syd Barrett, one of the founding members of Pink Floyd, has died. It happened a couple of days ago, and the cause was given as complications from diabetes. Poor Syd - he was more famous for being destroyed by fame than he was for his many artistic achievements.

Those of you of a certain age will remember a television programme run by Noel Edmonds on Saturday mornings in which children offered things that they wanted to swap for something else which had approximately the same value. The "approximately" is the interesting bit, and at least one person has seen the advantages it can bring. You may well have seen the guy who started a website a year ago with a large red paper clip, which he wanted to swap for something else. He didn't mind what the something else was, as long as he ended up with a house after a certain number of trades.

Crazy, right? It gets better. A chain of 16 exchanges followed, for items of increasing value so that eventually what was on offer was dinner with the rock star and golfer Alice Cooper. This is where it gets really surreal: dinner was swapped for a snow globe produced by the fan club of the rock band Kiss. This was, I'm told, a rare item - and it attracted the attention of the actor Corbin Bernsen who collects the things (he has thousands of them.) In exchange, he offered a paid role in a movie he's producing, and that was enough for the townspeople in a village in Sasketchewan to stump up the final item.

So now Kyle MacDonald has finally got his house.

There was much discussion of the weekend's episode of Doctor Who in the office today. Daleks battling Cybermen - and just how crap did the Cybermen turn out to be when confronted with four pepperpots? "You are better than us at one thing," said the head Dalek, who had a rather fetching black paint job. "You are better at dying!"

Who would have thought the Daleks would start coming out with all those one-liners? "This is not war, this is pest control!" was another one, and it really did get to the point where I was expecting the Dalek leader to bellow something like "come and have a go if you think you're hard enough." Mind you, there was a real Dad's Army moment in there too: after the Cybermen and the Daleks had both shouted "IDENTIFY YOURSELF!" at each other for several minutes, we got this immortal exchange:

Dalek:
DALEKS DO NOT TAKE OR-DERS!

Cyberman:
YOU HAVE IDENTIFIED YOURSELVES AS DALEKS!"

We were also talking about cakes in the office (it's Monday, after all), and the two subjects eventually and rather predictably merged together. In the light of all this I suppose it was inevitable that someone on Flickr would create a group pool dedicated to cakes in the shape of Daleks... There are some fairly mouth-watering examples in there, but some that definitely aren't. And do I see evidence of one or two edible ball bearings in there? Top banana!

This month's potentially dubious situation has to be the introduction of a new painkiller based on a neurotoxin derived from sea snails. I'm sure there's a plot from The Simpsons in there somewhere.

I had another go at installing that Bluetooth dongle - but no luck. Motorola's support people replied very quickly, but I'd already tried all the things in the support document they sent me, and they didn't work. If, as it appears, Windows XP SP2 is the problem, I might have a go installing it on a machine running Windows ME and see if that makes any difference. There really are times when I feel like saying to hell with it and switching permanently to Linux.

As a complete contrast, I've just tried out my Giottos Rocket-Air blower on my digital SLR, and it's managed to shift the dust on the sensor on the first attempt. I ordered it from Just Ltd. in Newbury, who once again delivered the goods the next day. I particularly like the thank-you email they send when you order, and it's safe to say I'm a very happy customer of theirs.

I need the camera to be taking tip-top pictures, too, as the twins are going to their prom tomorrow and I'm taking their portraits.

Mr Stallone is 60 today. If he was like us mere mortals, he would really be a bit too old to be contemplating making another Rocky movie. But we're talking about the man who played Judge Dredd. There's more: he has a Rambo movie on the cards as well. Wow. And yes, I know some other guy is 60 today too, but the less said about him the better...

I've just spent the last 90 minutes trying to get a bluetooth adaptor to work with my computer so it can talk to my mobile phone, with no success at all. I can run Motorola's software OK, but once it stars installing the drivers, the install wizard asks me to insert the dongle into the PC. At that point, Windows fires up its new hardware wizard and installs Microsoft's drivers for the closest device it can think of. This tramps all over the Motorola installation and I end up with something that nearly works, but not quite. Right now I'm very frustrated by the whole thing and have given up for this evening. Maybe I'll try again later.

So, the secret's out and the BBC have announced who will be Doctor Who's next assistant: Freema Agyeman, who was actually in last Saturday's episode, although the character she played was killed off.

Germain Greer writes about the seedier aspects of reality TV in today's Guardian. I don't watch Big brother, and after reading about some of the things that go on in the programme, I'm really glad I don't. Aside from the ethical concerns, questions are being raised about how manipulative the presentation of content has become, and there's a general reek of nastiness about the whole franchise. But as Ms Greer says, "huge amounts of money are being made by a galaxy of corporations, merchandising and re-merchandising slipshod trash." So don't expect it to change or disappear any time soon, then.

If you've been reading this blog for long, you'll know that in the last six months or so I've become heavily involved in digital photography and the photo sharing website Flickr. I started this month by discovering that a couple of my pictures have made it into Flickr's explore pages, which show the top 500 interesting pictures of each day. Flickr's interestingness rating is an elusive and highly secretive beast, and I am absolutely chuffed to bits about making the grade.

It looks like the Space Shuttle may launch today as weather conditions have improved - it's being refuelled at the moment. I hope everything goes well this time around.