This month I helped celebrate a wedding in Belgium. It was really good to get away from it all for a few days and travel to somewhere new. I'd forgotten how much I enjoy socialising and getting out and about with a bunch of friends, both old and new.

I also devoted a lot of time to improving my guitar playing, and I was delighted to discover that it's really beginning to make an audible difference.

IN MY OWN LITTLE WORLD

Some days all you can do is shut the door, take the phone off the hook, pick up a guitar, and play...

My friends Mel and David got married last week. I travelled to Belgium on the Eurostar to meet up with them in the picturesque Medieval city of Bruges. It was all rather lovely. 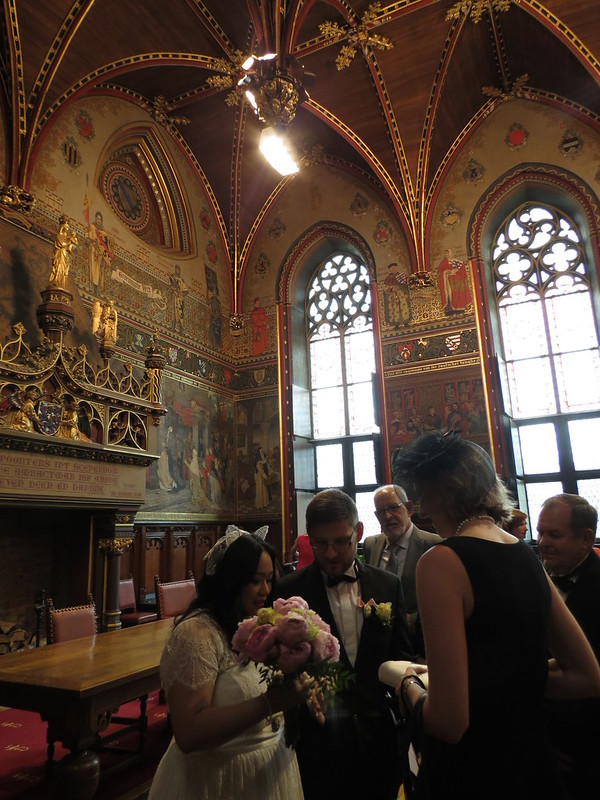 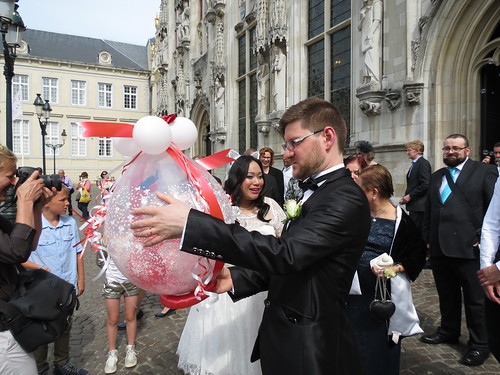 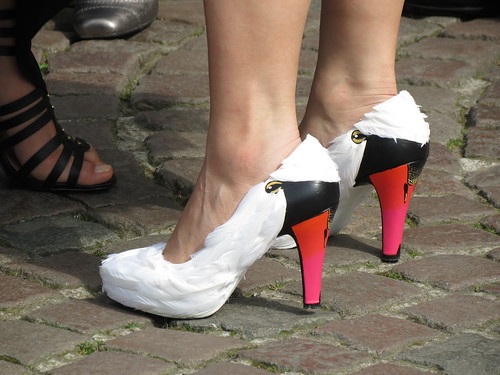 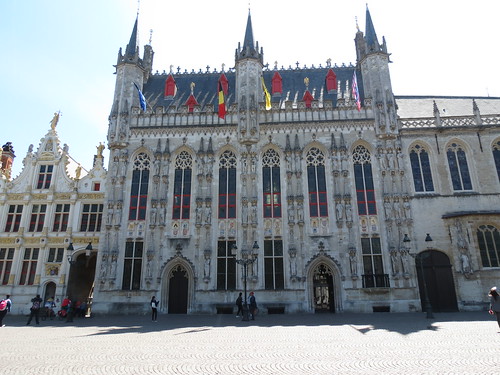 The Gothic Hall in the Oud Stadthuis was the most spectacular venue for a wedding I've ever seen. It certainly made for a very memorable occasion!

Then we took a boat trip around the city's canals... 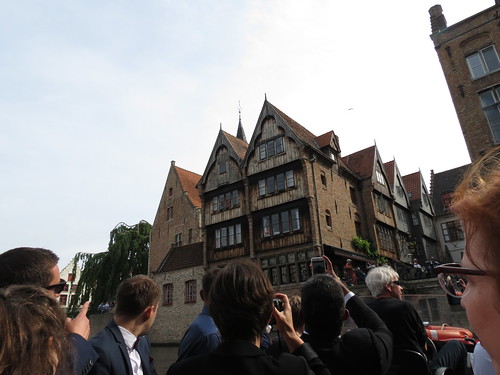 ...before making merry into the small hours of the morning. The rest of my trip included some typically touristy things, such as a visit to the Beer Museum which, of course, has a bar with a tasting menu. 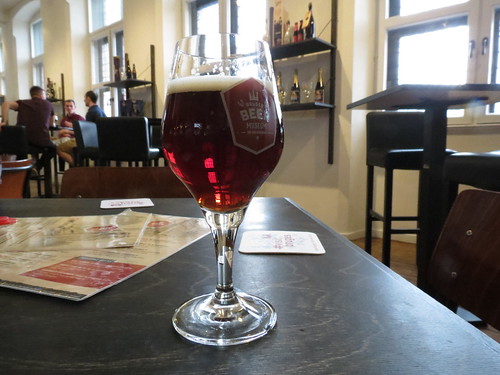 That was a Rodenbach "Grand Cru" - matured for two years in oak casks. Once you got past its unusually sour taste the flavour was incredible. The aftertaste just goes on, and on... Bruges has several breweries, one of the largest being De Halve Maan, who recently hit the headlines by crowdfunding a beer pipeline through the city. Contribute enough, and they promise you a bottle of Brugse Zot (very nice beer indeed) every day for the rest of your life! The story of how Brugse Zot (which translates as "Bruges Madman") got its name is a fun one, too. The citizens of Bruges once imprisoned Emperor Maximilian of Austria for ransom when he paid the town a visit. It was a pretty good-natured affair by all accounts, and they released him unharmed. But he wasn't best pleased, so to make amends, they later invited him to a festival in his honour which was intended to raise funds for a madhouse - a grand altruistic gesture designed to impress him. Subjected to a parade of jesters and fools to this end, Maximilian's response was rather terse:

"Bruges is a madhouse."

My visit also involved the consumption of heroic quantities of chocolate, coffee, and cake. It was all delicious. 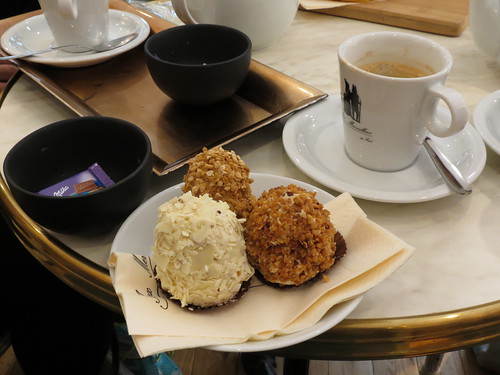 If you ever want to go somewhere fascinating with serious amounts of culture (I went to a Picasso exhibition and a Miro exhibition) as well as gourmet culinary experiences, I can seriously recommend Bruges. It's quite possibly the most picturesque and photogenic place I've visited in many years. 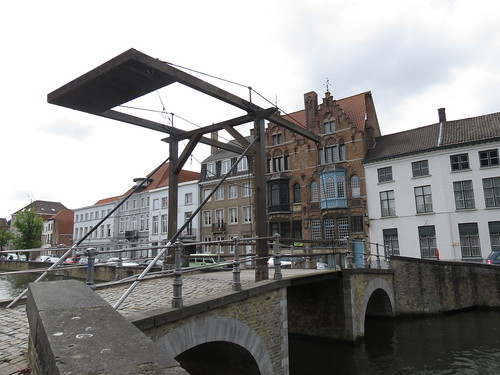 I've only been home a few days and I already want to go back.

My friend (and phenomenal Flamenco guitarist) Ruben Diaz posted a video on YouTube last month where he talks about the difference between playing and practising and what he said has really stayed with me, because it underlined a change that I made in my playing a few months ago: I dug out all the old exercises from back in the 80s when I took guitar lessons, and started to work through them properly for the first time. Alternate up and down picking, arpeggios, scales - all the things I should have worked on back then, when I was more interested in getting a guitar sound that matched those of my heroes - are, for the first time, things that I recognise I need to master if I want to improve. So rather than just sitting down for an hour or two a day and playing, I've been sitting down for an hour or two and practising instead. The exercises are repetitive, for sure, but that's the whole point. They're designed to shift particular aspects of playing from conscious action into muscle memory, so that you're able to do them without having to intentionally or actively think about what you're doing. Once that happens, you can start to focus on playing with more precision, with more expression, and (something that the younger me would have been particularly interested in) with more speed.

When I was younger I simply didn't have the patience to put in enough hours for the exercises to have an effect on my competence. Playing seven notes, up and down, over and over again? Bor-ing! As a result I lost motivation and eventually stopped having lessons altogether. Now that I'm older, I understand just how important practice is in gaining mastery of something. I'm also curious to see if I can turn myself into the guitarist I always dreamed of becoming. It may have taken me thirty years, but I finally get what Ruben says: it's the time you spend practising, not the time you spend playing, that is going to make you a better guitarist. You have to work on the things you can't do to move forwards.

When I bought the Jackson - my first ever brand-new guitar - two years ago I suddenly discovered my love of playing guitar all over again. As a result, I was spending five or six hours a day just playing for the joy of it. The sheer amount of time I spent just noodling around on the fretboard built my calluses back up again again and restored the strength in my fingers. But I was only doing the same old things I always did when I picked up my old guitar, playing the same old licks and riffs I was playing decades ago. They got me back to the level of proficiency I'd had in the 80s, but if I'm honest I can't really say that all that playing made much of a difference to my technical abilities. I didn't really improve as a guitarist. I wasn't trying anything different, so I wasn't making progress.

In fact, the new amplifier made much more of a difference to the music that I recorded than my playing did. My guitar sound was good enough that anything I did sounded amazing (to me, at least). Eventually, though, the novelty wore off. Playing the same sort of stuff over and over without progressing becomes less and less satisfying and as I listened to my playing I kept finding myself thinking about how I could make it sound better. In the past, the answer has always been to acquire new gear - whether it's a new pick, a new effects pedal, a new amplifier or a new guitar - but much as I tried to avoid the conclusion, I kept on coming back to one thing I'd so far managed to avoid: I needed to work on my technical abilities.

The "aha" moment for me came last October. Ironically, it came while I was playing synthesizer, not guitar. For Rocktober I set myself the task of recording a version of Jan Hammer's track from the Miami Vice TV series called The Trial. It features a couple of fast runs which I had to sit down and figure out, note by painful note. I'd never attempted anything like this before. Much to my surprise, I found that if I broke the task up into manageable chunks - looping single bars of the original recording in Ableton and playing along to them - I could figure out what was going on. I was even more surprised to discover that after sufficient practice I could play each run in its entirety, and I could do it accurately. The recording I ended up making was played in real time rather than having to program it in step time. I was doing things on keyboards that I'd previously assumed were completely beyond my abilities.

"If I can do this on keyboards," I wondered, "does that mean I can do the same thing on guitar?" I have been working on finding out the answer to that question ever since.

So I dug out my old notes and papers from long ago, and for the first time in decades I sat down, not to play, but to practice. To start with I took things very slowly, working in small chunks. I'm now starting to combine those exercises together in longer snatches of music. As I watched Ruben's video I was nodding enthusiastically in agreement to every point he made. Even after the limited amount of time in which I've changed my approach to guitar, I've noticed a significant change in my abilities, so the answer to the question above appears to be "Yes!"

Fifty/Ninety starts again next month, and I've set myself a challenge. I want listeners to hear a radical change in my playing, not because of any shiny new toys but because I've made progress as a guitarist. It's going to be an interesting task.